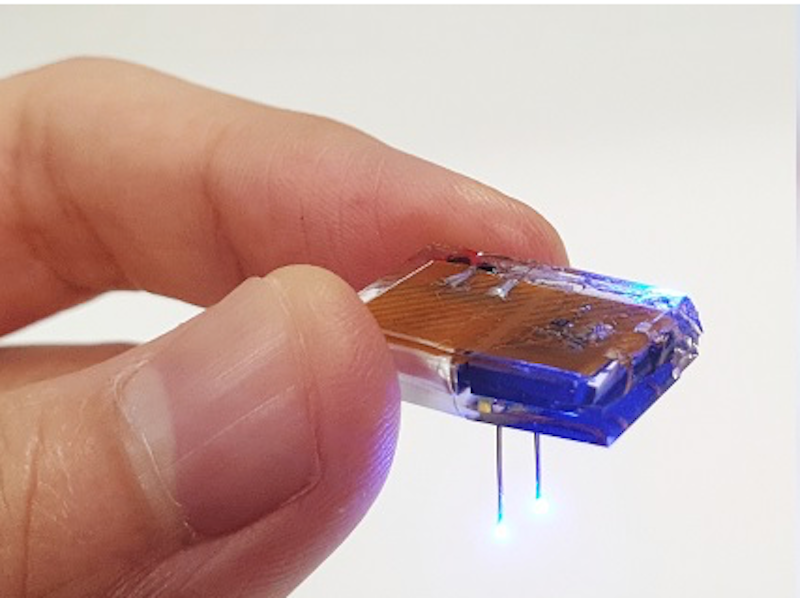 Researchers have invented a smartphone-controlled soft brain implant that can be recharged wirelessly from outside the body. It enables long-term neural circuit manipulation without the need for periodic disruptive surgeries to replace the battery of the implant. Scientists believe this technology can help uncover and treat psychiatric disorders and neurodegenerative diseases such as addiction, depression, and Parkinson's.
A group of KAIST researchers and collaborators have engineered a tiny brain implant that can be wirelessly recharged from outside the body to control brain circuits for long periods of time without battery replacement. The device is constructed of ultra-soft and bio-compliant polymers to help provide long-term compatibility with tissue. Geared with micrometer-sized LEDs (equivalent to the size of a grain of salt) mounted on ultrathin probes (the thickness of a human hair), it can wirelessly manipulate target neurons in the deep brain using light. For further information see the IDTechEx report on Bioelectronic Medicine 2019-2029.
This study, led by Professor Jae-Woong Jeong, is a step forward from the wireless head-mounted implant neural device he developed in 2019. That previous version could indefinitely deliver multiple drugs and light stimulation treatment wirelessly by using a smartphone. For more, Manipulating Brain Cells by Smartphone. For the new upgraded version, the research team came up with a fully implantable, soft optoelectronic system that can be remotely and selectively controlled by a smartphone. This research was published in Nature Communications.
The new wireless charging technology addresses the limitations of current brain implants. Wireless implantable device technologies have recently become popular as alternatives to conventional tethered implants, because they help minimize stress and inflammation in freely-moving animals during brain studies, which in turn enhance the lifetime of the devices. However, such devices require either intermittent surgeries to replace discharged batteries, or special and bulky wireless power setups, which limit experimental options as well as the scalability of animal experiments.
"This powerful device eliminates the need for additional painful surgeries to replace an exhausted battery in the implant, allowing seamless chronic neuromodulation," said Professor Jeong. "We believe that the same basic technology can be applied to various types of implants, including deep brain stimulators, and cardiac and gastric pacemakers, to reduce the burden on patients for long-term use within the body."
To enable wireless battery charging and controls, researchers developed a tiny circuit that integrates a wireless energy harvester with a coil antenna and a Bluetooth low-energy chip. An alternating magnetic field can harmlessly penetrate through tissue, and generate electricity inside the device to charge the battery. Then the battery-powered Bluetooth implant delivers programmable patterns of light to brain cells using an "easy-to-use" smartphone app for real-time brain control.
"This device can be operated anywhere and anytime to manipulate neural circuits, which makes it a highly versatile tool for investigating brain functions," said lead author Choong Yeon Kim, a researcher at KAIST.
Neuroscientists successfully tested these implants in rats and demonstrated their ability to suppress cocaine-induced behaviour after the rats were injected with cocaine. This was achieved by precise light stimulation of relevant target neurons in their brains using the smartphone-controlled LEDs. Furthermore, the battery in the implants could be repeatedly recharged while the rats were behaving freely, thus minimizing any physical interruption to the experiments.
"Wireless battery re-charging makes experimental procedures much less complicated," said the co-lead author Min Jeong Ku, a researcher at Yonsei University's College of Medicine.
"The fact that we can control a specific behaviour of animals, by delivering light stimulation into the brain just with a simple manipulation of smartphone app, watching freely moving animals nearby, is very interesting and stimulates a lot of imagination," said Jeong-Hoon Kim, a professor of physiology at Yonsei University's College of Medicine. "This technology will facilitate various avenues of brain research."
The researchers believe this brain implant technology may lead to new opportunities for brain research and therapeutic intervention to treat diseases in the brain and other organs.
Source and top image: KAIST~