The third Future Powertrain conference was a great event with about 400 delegates and a total of 35 table exhibitors. The program consisted of a great line up of speakers for the opening and closing keynotes as well as two parallel tracks that spanned over a day and a half. Speakers included automotive manufactures, their suppliers, academics and government organisations. The key message was that in the era of strict government emission standards, there is increasing need for electrification, smart drive assist, low carbon solutions, engine and transmission technologies to reduce air pollution from the transportation industry.
The summary of the presentations given during the FPC2016 are discussed below.

Battle of the powertrain

The need to minimise real world emission would require changes to the incumbent technology which include downsizing of the engine, the use of lightweight materials and clean fuels. Alternate powertrains such battery vehicles, hybrid vehicles and plugin vehicles would increasingly penetrate the market however, it is unclear which powertrain would be the winner.

It was highlighted that connectivity, sensors and artificial intelligence (automation) technologies are rapidly changing in the automotive industry. Michael Hurwitz from the Department for Transport gave an example on fuel saving when two heavy duty trucks are travelling at a driving distance of 36 ft due to the effect of reduced aerodynamic drag. This tailgating of trucks could see up to 10% fuel savings.
Andy Pascoe from Transport Systems Catapult presented on the findings from a recent UK study which concluded that intelligent mobility is a "user-eccentric" business. It does not depend entirely on the powertrain technology (hybrid, electric, ICE or fuel type) but also on the traveller's need. 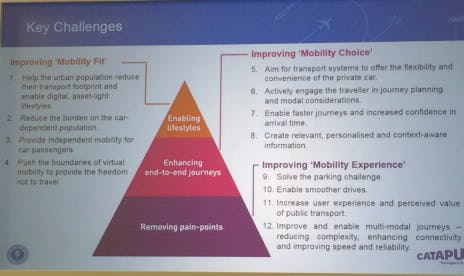 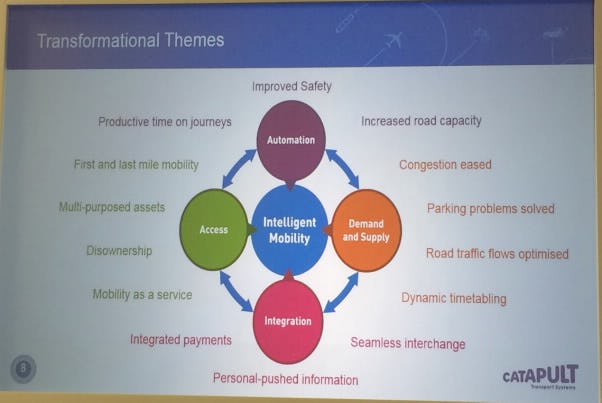 The future of autonomous vehicle is NOW! The presentation given by Dr Malte Jaensch from Porsche Engineering shows how autonomous driving would change the way we drive. He pointed out the fact that exterior design, interior design and comfort would matter the most for autonomous vehicles performance and handling would be standardised and therefore will be of minor importance to the customer. The electric powertrain for autonomous vehicle would have to be low cost, light and small, robust, efficient and safe with low noise and mechanical vibration. 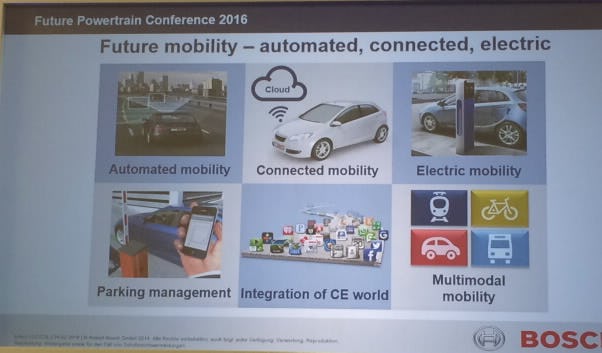 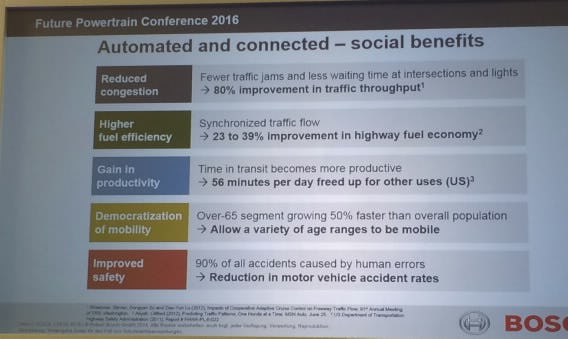 Neil Palmer from Richardo spoke on "Global Transportation Challenges: The path to Connected and Autonomous Vehicles". He highlighted some of the challenges to the adoption of autonomous vehicles which include lack of public confidence, legislations and technology ethics. On another note, Michael Talbot from Centre for Connected and Autonomous Vehicle championed the need for autonomous vehicle to help reduce a large portion of road accidents of which a large proportion is caused by human error. 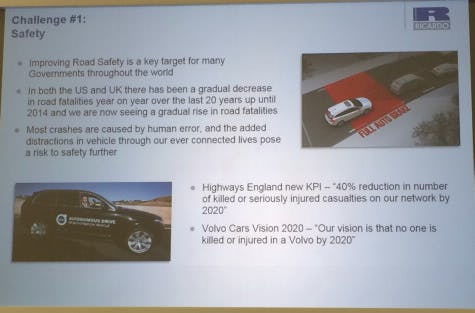 It was mentioned that batteries are key components to many future powertrains and advancement in the battery technology is important to drive the electrification of the transport vehicles.
Dr Emma Kendrick from Sharp Laboratories gave a presentation on "Development of novel sodium ion battery technologies". She highlighted that a trade-off has to be made with the properties of lithium-ion variants. For example, while the LFP material is self-insulating, it has low energy density when compared to the NMC chemistry. She talked on the use of sodium ion batteries for stationary storage applications which has the potential of 30% cost savings when considering both material cost and life cycle of the material as manufacturing cost do not change significantly. However, Na-ion batteries have half the energy density when compared to other Li-ion batteries. She mentioned the restrictions on the transport of Li-ion batteries and also the current size limitations of solid state batteries which are 2cm by 2cm. Sharp are not looking to produce solid state batteries. She concluded on the note that "Each market requires a different cell and not all cell technology fits all". 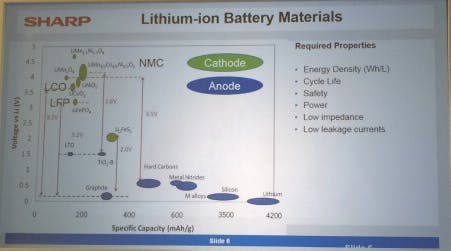 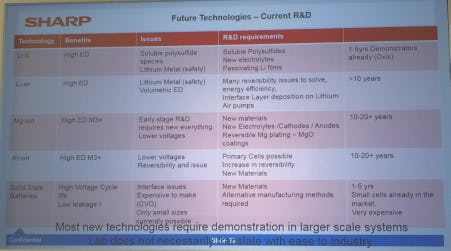 Dr Uwe Weidemann from AVL presented on "Cost-optimised development of battery packs". He highlighted that battery packs remain the most expensive commodity in any electric vehicle. He mentioned some of the factors that contribute to the pricing of battery packs used in electric vehicles. For example, liquid cooling battery management systems (BMS) are more expensive than the ones designed with air cooling. Furthermore, the charging mode affects the battery pack price - DC fast charge batteries are more expensive because you need more connectors and insulators to ensure the safety integrity of the battery system when they are subjected to high fast charging voltages as high as 800 V. He said that cost of battery cells is associated with volume and there is currently no standard for the design of battery packs. He also mentioned that although the manufacturing cost of cylindrical cells is cheaper than prismatic cells, there would be an increase in the demand for prismatic cells due to the flexibility with packaging. 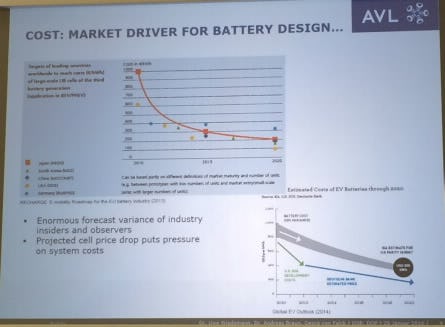 Low carbon alternatives for off road and heavy duty vehicles

Presentations were given on alternative low carbon vehicles. For example Dr Will Drury was of the opinion that long haul and heavy duty vehicles will require low carbon liquid fuels (likely to be hybrid which is a combination of ICE using liquid fuels and batteries) while light duty vehicles are more suited to be pure battery electric. Paul Bennicke from Clean Air Power spoke on the cost and emission benefits of using heavy duty vehicles using natural gas as a clean fuel. Some of the immediate approaches for low carbon emission vehicles include downsizing of the engine, use of lightweight materials, rotating machines and power electronics. 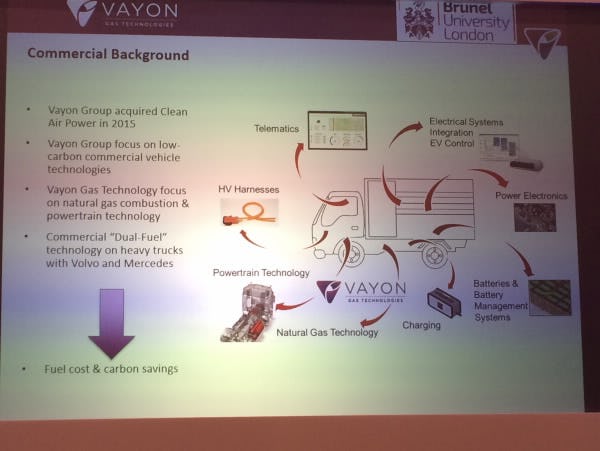 Dr Paul Mitcheson from Imperial College gave a talk on "Light weight wireless power transfer for EV charging". He highlighted that some of the challenges of using ferrite for charging is the fact that they are heavy, costly and brittle. Other issues mentioned is the scalability of wireless charging and how difficult it is to have charging stations in cities due to limited space. He advocated for the need of inductive wireless charging in order for EV adoption to have a foothold. However, there are still major concerns with regards to the human exposure limit and there are safety regulations being put in place. Based on lab work, a 3kW has already been achieved with around 80% efficiency. 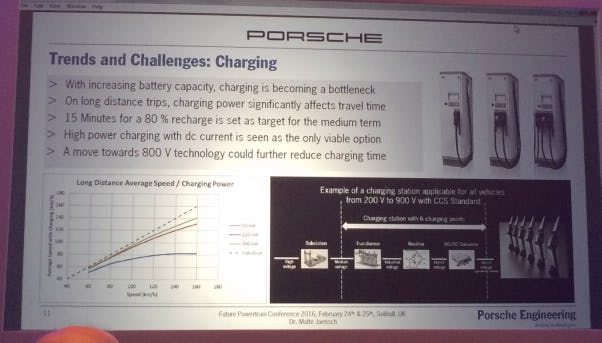